about chevron in the U.K.

Our business interests generate economic impacts at multiple levels across the U.K. economy and in many different ways, from capital investments, taxes, jobs, production and technology development, to supporting a world class supply chain and the global procurement of U.K. goods and services.

Through our subsidiary Chevron Britain Limited, we retain our 19.4 percent non-operated working interest in the Clair Field and associated assets, which is operated by BP Exploration Operating Company Limited.

The Clair field is being developed using a phased approach. Clair Phase 1 was sanctioned in 2001 and was developed with a single fixed platform with production and processing facilities. First production was achieved in February 2005.

The second phase of development, the $10 billion Clair Ridge project, is designed to have a capacity of 120,000 barrels of crude oil and 100 million cubic feet of natural gas per day. The project was sanctioned in 2011 and in 2016 the construction and installation of two new bridge-linked platforms was completed. First oil was achieved in November 2018.

A six well appraisal and exploration drilling programme was conducted from 2013 into 2015 and following encouraging results, a third phase of development, Clair South, is currently under assessment.

Proved reserves have been recognised for the Clair Ridge project which is estimated to produce over 600 million barrels and has an estimated production life extending through to 2050. Net daily production in 2018 from the Clair Field averaged 5,248 barrels of liquids and 1.16 million cubic feet of natural gas.

at the centre of technology

Technology plays a critical role in meeting the challenges we face in the energy business. It has enabled Chevron to maximise resource recovery, improve operational efficiency and environmental performance, maximise reliability and production and develop new oil and gas reserves in deeper water and more complex formations.

Success depends on sustained collaboration across business segments and time zones. We leverage the ingenuity of our employees, suppliers and research partners to test and develop innovative new technologies that will help us meet energy needs and support economic growth around the world.

Our U.K. Global Technology Centre (GTC) was established in 2007 and is a strategic extension of Chevron’s Energy Technology Company. It provides a hub of technical excellence that supports Chevron's global portfolio of projects. The U.K. GTC enables innovation and new technology deployments for a diverse range of Chevron operations and development projects, including Gorgon and Wheatstone in Australia, Tengizchevroil in Kazakhstan, and the Permian Basin in the United States.

As the digital transformation gathers pace, Chevron is focused on applying data science, predictive technologies, workflow automation and robotics to improve the safety and reliability operations.

Chevron has located the headquarters for three of its major regional organizations in the U.K. From our London offices we operate our exploration and production activities for Europe, Eurasia and the Middle East, European lubricants sales and marketing, and natural gas trading.

London is the regional headquarters for Chevron’s Finished Lubricants operations in Europe, the Middle East and Africa. It is also a regional hub for the Chevron Marine Lubricants business providing support to marine lubricant activities globally.

Our Downstream business in the United Kingdom is conducted through our subsidiary Chevron Products UK Limited. Finished lubricants are sold under the Texaco® and Caltex® master brands in Europe, the Middle East and Africa respectively, along with product brands Havoline® for engine oils and coolants for passenger cars and vans, Delo® heavy duty engine oils and coolants and Techron fuel system cleaners across the region.

Our products are sold directly to customers or via our network of distributors, a locator for which is available here.

Chevron’s London office is home to one of the company’s four global trading hubs, along with Houston, Texas; San Ramon, California; and Singapore. The Supply and Trading organisation manages daily commodity transactions of 5 million barrels of liquids and 5 billion cubic feet of gas. 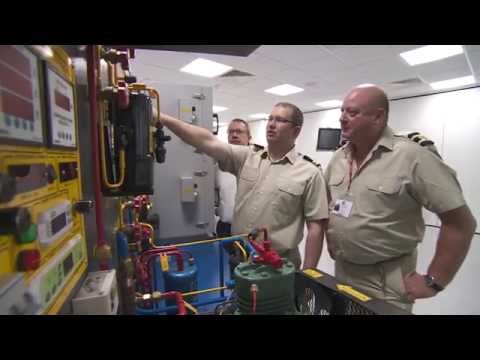 The Glasgow centre is a state-of-the-art facility supported by some of the industry’s leading instructors, offering 30 training courses that cover navigation (bridge watch keeping, basic ship handling, collision avoidance) to cargo handling (liquid and LNG) with technical areas including advanced hydraulics among others. The centre also offers an operational and management leadership programme, as well as various programmes to help assess deck and engineering officers for promotion.

U.K. Tax ApproachFind out about Chevron's approach to U.K. tax